So I flew out of Atlanta early the first morning to head out to San Francisco to meet Rachel. (She had been working at a conference for work the last 6 days in San Fran.) Once I landed and got over to the hotel (in Union Square), we set off to find lunch (it was 4:30 Eastern Time so I was a “little” hungry). Rachel had heard about this awesome burger place (Super Duper Burgers), so we ended up eating there. It was crazy good. I wish I had gotten a picture of the place.

After lunch we grabbed the trolley (see picture above) and headed down to Fisherman’s Wharf (this was our second time in San Francisco so we didn’t feel pressure to hit up a bunch of things). We ended up walking around the Fisherman’s Wharf area for several hours. Saw the Golden Gate Bridge (from a distance), grabbed a milkshake from In-N-Out Burger (and a tshirt for me!), took pictures of the seals, and of course…hit up Ghirardelli. 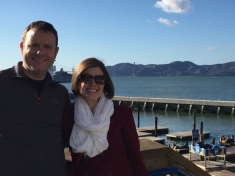 Shot of GGB in the background

So wished we had this on the east coast!

Great view of the city

We headed back to Union Square later that afternoon. We shopped a little before grabbing a quick dinner and heading back to the hotel. We had an early morning coming as we were going to pick up the rental car and start our drive down the coast!