I woke up a little later this morning (my body clock was starting to adjust to the Pacific Time Zone). I knew Rachel wanted to sleep in, so I thought I would go for a quick run. And wow…the run was one of the best parts of the day. When we got to our hotel the night before it was too dark to see how beautiful the scenery was right in front of us. I ended up getting in a nice and steady 3 mile run overlooking the ocean and rocks below me. It was so peaceful listening to the sounds of the waves crashing against the rocks. And with a nice chill in the air…I felt I could have run for much longer.

Right across from the hotel

Made for a nice run when you have this to look at.

Once I got back Rachel was already up and showered. So I got cleaned up and we packed up before grabbing a quick breakfast at the hotel. The plan for the day was to stop along the way as we made our way down to Anaheim from Cambria, where we stayed the night before.

One last look at the scenery across for our hotel

The hotel we stayed in

The trip today was a little different from the day before. We knew we wanted to hit up a few places along the way, but at the same time we wanted to try to get through LA before rush hour as well.

Our first stop was Morro Bay, which one of my friends (Chris Coleman) had suggested to me. As we were driving toward Morro Bay, we saw a huge rock in the distance (Morro Rock). We both kept saying how cool it looked. But as we got even closer…it was breathtaking. We drove right up to the rock and took several pictures of it and the surfers in the ocean over to the right side. There had to be 50 surfers out that morning.

View of the ocean and mountains from Morro Rock

Next, we started to make the trek down to Santa Barbara. We found a Starbucks along the way (surprise surprise). Once we got to Santa Barbara, we walked over to one of the piers to look around and take in all of the beautiful scenery. We knew at this point we had reached Southern California due to the presence of palm trees (plus it was definitely a bit warmer). Some of the best photos from our trip came from walking out onto this pier. We found a nice Mexican restaurant for a late lunch before heading on our way.

View of Santa Barbara from the pier

Another view of Santa Barbara from the pier

We started the final leg of our drive, which was probably the longest stretch we had without stopping. We truly experienced LA traffic in all of its glory. Needless to say, it took several hours to get down to Anaheim.

Once we arrived (late afternoon), we checked in to our hotel before heading over to Downtown Disney for a few hours to shop and eat dinner. Then we headed back to the hotel to rest up for Disney the following day.

They were getting ready to open a Ice Rink in Downtown Disney the next day. 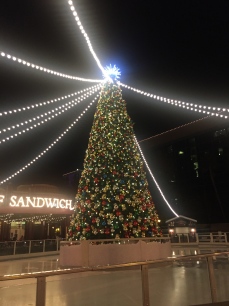 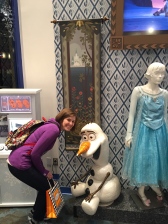 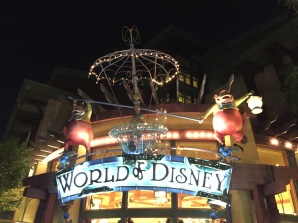 Tomorrow’s blog finishes up our California trip with Rachel taking over the reins to blog about our time at the Disneyland Resort.