I’ve been a Duke Basketball fan since 1987. Growing up in Alabama where football is king, I was looking for a college basketball team to cheer for. My older brother started watching Duke in 1985, and I had a good friend in middle school who moved from Durham, NC and was a huge fan of Duke. So I started watching them play and was hooked! Over the almost 30 years I have been a fan of Duke, they have had amazing success, with 12 final fours, 5 national titles and 13 ACC championships.

Part of the Duke Basketball Museum 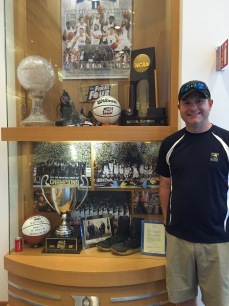 Of course, this can all be attributed to their legendary coach, Mike Krzyzewski (or Coach K). I have been to multiple games at Cameron Indoor Stadium, in additional to multiple away games in Atlanta and Tallahassee. I love the Duke Blue Devils! 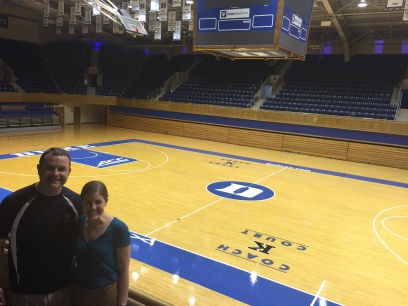 Which means, of course…I am not a fan of their biggest rival, the University of North Carolina. The Tar Heels are the enemy. For the past 30 years, I’ve watched UNC have major success as well, with several final fours and national titles. Every year Duke has a “home and home” against UNC. Tonight is the first of at least 2 meetings in 2016 (they could meet in the ACC tourney and/or the NCAA tourney).

Duke has had amazing success against UNC the past few years. They are 10-3 over the last 13 meetings, including a season sweep last year. However, I fear this year might go the other way. UNC is a top team with depth, experience and talent. Duke, while very talented, is young and very thin. Plus, tonight’s game is in Chapel Hill. But it’s Duke/UNC. You never know what can happen in this game.

However, no matter the outcome, I am looking forward to this great basketball rivalry. It is, in my opinion, the best in college basketball and one of the best in sports. Let’s go Duke!