Today I am continuing with the second part of the Peachtree Road Race recap from the 4th of July weekend.

Being in a earlier corral for the race had its advantages, mainly being able to start before the temperature got too unbearable. However, it did mean getting up pretty early to get over to the race start.

I typically like to get to the race area a little early so I can get my bearings straight, stretch a little bit and find a bathroom. We ended up getting there a good hour before our corral was to begin, which gave us time to walk around and take in the atmosphere of the world’s largest 10K race.

Once we got to our corral, the national anthem was sung and the first corral was off. We started making our way up to the start and before long we were off.

Rachel and I decided to take this race easy, since we’ve never run it before. Plus, with the humidity/heat already pretty strong, we knew we needed to conserve energy. The majority of the race runs down Peachtree Street and the crowd support was probably the best of any race I’ve been a part of.

I was very pleased with the number of water stations for a 10K race. There were probably 4-5 total stations for 6.2 miles. Plus, there were plenty of people giving out water, beer, pizza, you name it…

The race has a fair amount of hills starting around mile 3, but honestly I’m so used to training in Atlanta that they didn’t seem to bother me too much. However, the biggest issue was just the amount of sweat that was coming off my body the last few miles. I was soaked. Several friends who have been running the PRR for years said this was the hottest one they’ve been a part of.

Near the finish line

We crossed the finish line (according to my watch) with a little under a 10:30 per mile pace, which I was pleased with, since the humidity was so draining. 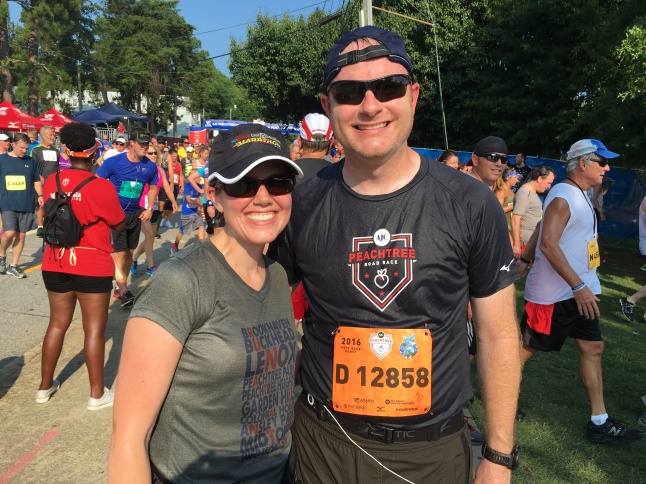 An added bonus was running into our friend Jerry Carnes, who works with 11 Alive News and was there covering the race. 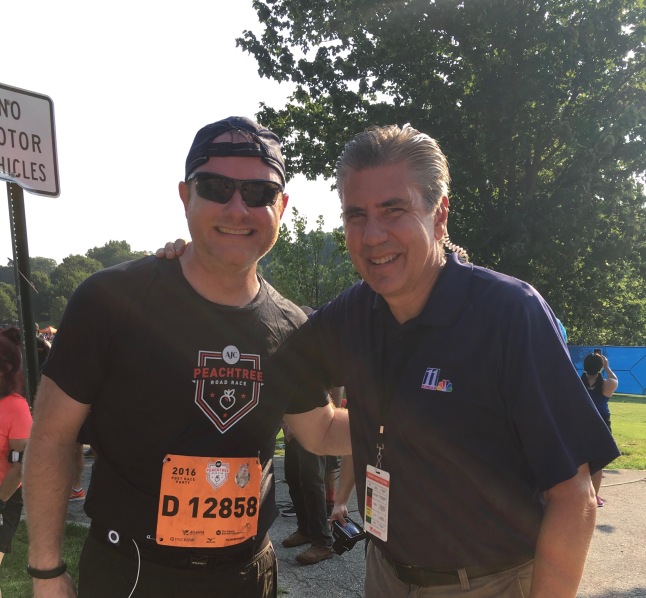 We picked up our race shirts (which you don’t get unless you finish), our runner’s boxes, water/Powerade and made the trek back over to MARTA to head home. Unfortunately, the finish line is a good mile plus from Marta, so that part was not the best.

All in all, I very much enjoyed my first Peachtree Road Race. While the weather was pretty tough, I loved the course and crowd support. I look forward to running this race again in the future!