This morning Rachel and I headed over to the Cochran Shoals Trail, which runs alongside the Chattahoochee River. We had 19 miles on the schedule, which would be the longest run Rachel had ever done. We are both running the marathon at Walt Disney World Resort in January. I actually am attempting the Dopey Challenge (4 races over 4 days: 5K, 10K, Half Marathon and Full Marathon), which comes to a grand total of 48.6 miles.

I had been mimicking Dopey this week, so Wednesday I did 3 miles, Thursday 5 miles and Friday 7 miles. The weather this morning called for mid 40’s when we began and warming up to around 55 throughout the morning. Cochran Shoal Trail can run a little colder since it’s right next to the river. Rachel ended up wearing her pullover the entire run. I shed mine after about 4 miles.

We had no true goal in mind except to take it easy and finish 19 miles with smiles on our faces (which is a good philosophy that my friend Carlee likes to use during her races). The terrain at Cochran Shoals is ideal for most runners as it’s flat, not paved and there is a lot of beautiful scenery to look at.

We spent the first 12 or so miles just talking, with a few walk breaks in between. Here we are at mile 14. Just rocking along with a nice steady pace. Not used to taking a selfie while running (we started listening to music around mile 12 to give us an extra boost!).

Another selfie as we raced past 17 miles. Only two more miles to go. Still smiling and feeling good! 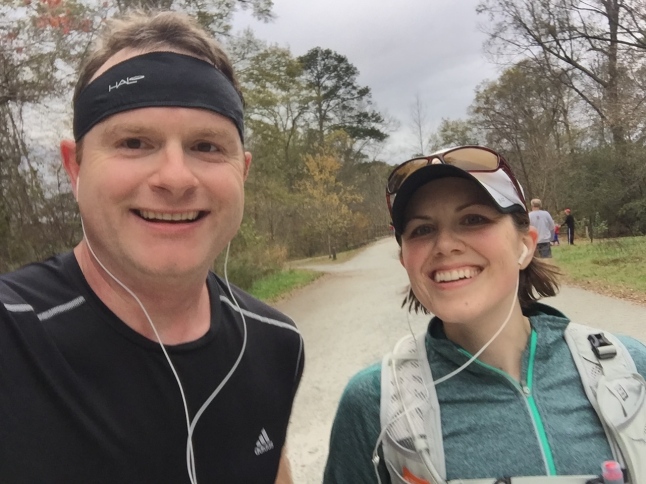 We ending up finishing at 19.3 miles, which was a little more than what we were aiming for, but we both felt great and definitely like we could have gone a little further. I was so proud of Rachel as she is hitting this higher mileage like a champ!