(The wife is taking over the blog today for part 3 of our trip to Disney for the Princess Half Marathon Weekend.)

To know me, is to know that I am not a morning person. I take forever to wake up, and have absolutely no patience for shenanigans before I’ve had caffeine.

If you know anything about runDisney, you know their races begin ridiculously early – some as early as 5:00 am. It makes sense, since Disney wants runners out of the park (specifically Magic Kingdom) before non-running guests begin arriving.

And that’s where our story begins: Allen and I woke up at 3:00 am the morning of the Disney Princess Half Marathon. Our plan was to wake up, eat a bite, get ready, and pick up the complimentary shuttle from the Caribbean Beach Resort.

Without getting into too much excruciating detail, transportation on the morning of the race was insane (it sounds like our experience was not unique, unfortunately). Long story short, our bus stop being the last in the resort, coupled with insane traffic, did not make for a great start to race morning (remember earlier when I mentioned my intolerance of early morning shenanigans?).

Luckily, I quite enjoy not having to wait in the corral for hours, so I forgave and forgot and we began the long journey to the starting line.

Allen and I both ended up in Corral F, which meant we started around 15 minutes after the race start. Neither one of us had a specific time goal in mind, so we decided to take it easy and enjoy!

We have participated in several runDisney races thus far, but this one was unique in many ways: the runners comprised around 90% women, which is about the same percentage of runners who wore a costume (SO many princess costumes, y’all). The route is the same as the half marathon in January, but it felt like maybe this one had a few more character stops along the way (although there were too few actual princesses, IMHO).

Because the lines for the character stops were a bit long, we just snapped some photos along the way (free PhotoPass access with our annual passes is everything) and had fun! Sadly, my iPod died around mile two, so I just kind of hung out and took in the sights and sounds (or, if I’m being honest, people watching).

Our sweet friends, Nick and Ciara, cheered us on in Epcot toward the end of the race, and then we were done! And now we have super cute Beauty and the Beast–themed medals! 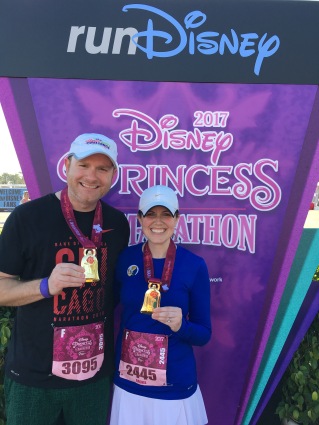 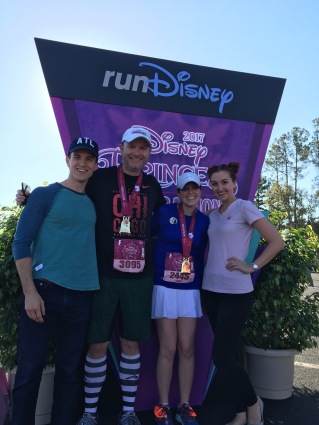 The weather was fantastic, and we enjoyed a few hours in the park before going home. Unfortunately, we both had to work on Monday, so the late departure was necessary – although I don’t recommend staying up for 22 hours…ever. Period.

All in all, the race was great, the princess/Beauty and the Beast theme was fun, and we had a great time with some wonderful friends. However, the parks seemed a little more crowded than usual, despite there being fewer runners than, say, in January. And we completely lucked out with fantastic weather (at least on race day).

While I don’t anticipate us running another Princess Half Marathon in the near future, I can truly say I had a great time running with my prince.