Two weekends ago, Rachel and I ran the 2017 Publix Georgia Half Marathon in Atlanta. It was my second straight year running this particular race, and the first time for Rachel. I was excited to have Rachel with me this year, as last year’s race was one of my favorite races of 2016. Plus, this was Rachel’s first half marathon in Georgia!

The weekend started out on Friday as I made my way down (using MARTA) to the expo, which was being held at the Omni Hotel at the CNN Center for. I ended up going to pick up shirts and race numbers for Rachel and me. The expo this year was quite a bit smaller than last year’s. Not sure why, but it felt like half the number of booths and size from the year before. 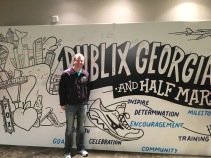 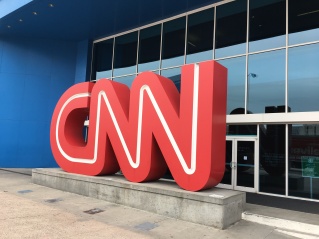 After grabbing our numbers/shirts, I walked around for a few minutes and actually ended up buying a couple of nice Atlanta Track Club pullovers for both of us for a great price. By the time I got back home, I think I had been gone less than 90 minutes, and that includes spending most of it on MARTA.

Anyways…since the race was on Sunday, Rachel and I took it easy on Saturday. Grabbed a little pasta for lunch and watched a lot of the NCAA basketball tournament. That night, we celebrated Rachel’s brother’s birthday with her family. It was a great night seeing them and honestly eating way too much food before a long run the following day.

The next morning came very early. We were up and out the door right before 5:30am. We took MARTA down to Centennial Olympic Park, where the race begins and ends. It was actually quite chilly that morning. I brought an old pullover that I tossed off at the beginning of the race. And after waiting around in the cold before the race, I was freezing and very happy I decided to bring an extra layer.

We ended up running into our running friend, Brandi, in the corral. It’s always good to see her for a few minutes. Before long, we were off.

Now this particular course, like a lot of Atlanta, is very hilly. I knew this going in, since I ran it last year. I tried to prepare Rachel the best I could. But sometimes you just have to experience it for yourself.

Our plan was to enjoy running together and try not to push it too much. This race takes you through so many awesome parts of Atlanta. And once our bodies got moving, the cooler weather actually helped a bunch. 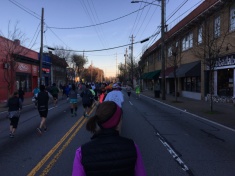 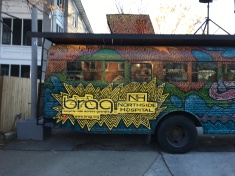 I was very pleased with our pace during the race. Even when we got to Piedmont Park, which is around mile 9, I was feeling good. Now, Piedmont Park to around Georgia Tech (which is miles 9.5 to 12) is mostly uphill. It’s pretty brutal to deal with an uphill climb at the end of a race after you’ve been running for 9+ miles. But honestly, I was so proud of Rachel. She knocked it out with me! 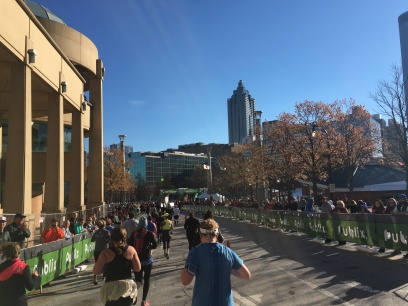 We finished in what I thought was a great time, especially with the hills. And crossing the finish line of another half marathon is such a joy to do with her. 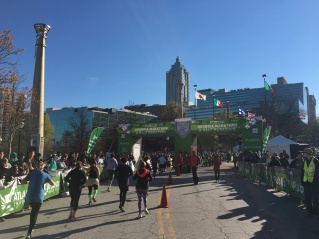 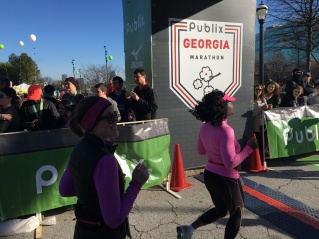 We picked up our medals, along with quite a bit of extra goodies (runner’s box, water, Powerade, and chocolate milk) and made our way back to MARTA to head home.

It was another successful half marathon and Rachel’s first half marathon in Atlanta! I’m trying to convince her to run another half marathon with me in late April in Chatsworth, GA called the Tear Drop. Apparently it’s one of the fastest half marathon courses in Georgia. I’m hoping to get close to my personal record for a half again! So…we will see! Until next time…